On the 28th June, 1838 Parker's Piece, named after Edward Parker in 1613, was home to a remarkable feast to celebrate the coronation of Queen Victoria. It is recorded that 15,000 of the towns poorer inhabitants attended the celebrations. 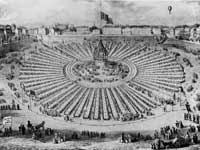 In the centre of the piece was a orchestra which performed from a bandstand covered in flags and flowers. Below the centrepiece bandstand was a extensive promenade area for those who had purchased tickets to help pay towards the costs of the celebration. Around the promenade was space occupied by 2,762 Sunday school children, and then, like spokes from a wheel were 60 tables to cater for 12,720 adults. At hand on the day were 351 stewards, 547 carvers, 441 waiters, 297 beer- waiters and 41 tapsters. There were 7,029 joints of beef, mutton, pork, veal and bacon, this worked out about 1lb of meat per head. Also available was 72lb of mustard, 125 gallons of pickles, four-and-a-half thousand 2lb loaves and endless supplies of salt. For sweet there were 1,608 plum puddings available.

The dinner began at two o'clock after grace had been sung, and while the meal was being ate, the band played and the combined choir of King's and Trinity Colleges sang. After completing the dinner everyone sang a special grace composed for the celebration, then pipes and tobacco were placed on tables, and glasses were charged from 99 barrels of ale, and the mayor proposed the Queen's health, it was responded with a deafening cheer, before everyone sang the Nation Anthem. 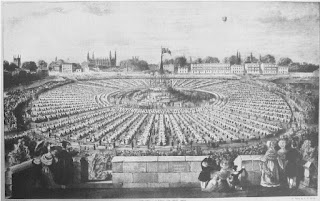 At five o'clock, led by the mayor and the band, everyone marched to Midsummer Common for rural sports and to see Mr. & Mrs. Green ascend in a balloon ( it later descended near Fulbourn ). A firework display ended the celebrations.

The day had been a wonderful success, it was the only day that week which had see good weather. The poor who were unable to attend from age or illness were entertained in their homes, and so were those in the workhouses.

The whole celebration cost £1,709 19s 6d. in documents I found in the Cambridgeshire collection, but other sources have said it totalled to £1,767 14 shillings and 10 pence.

Posted by Fonz Chamberlain at 03:52