In September 1939 Cambridge came home to around 3,000 children evacuee's sent from places which included London, Birmingham, Manchester, Liverpool and Leeds.

It was decide due to the risk of air raids on the larger cities that children and the sick would be safer in smaller towns and villages.

After arriving in Cambridge it was soon discovered that not all the evacuee's were happy to be here with some calling it a dull and dismal place and finding the families they were staying with far to posh compared to their own cockney parents.

It was also discovered many started to miss their families and could not adjust to life in Cambridge and it is believed within 3 months of arriving almost half returned home to face the Blitz with their families rather than stay any longer in Cambridge.

These articles may also be of interest: The Bombing of Vicarage Terrace
World War 2 Air Attacks on Cambridge 1940-1942

Cambridge's first shopping arcade Bradwells Court opened in 1961 on land next to Drummer Street bus station and remained there until 2006 when the area was redeveloped.
Posted by Fonz Chamberlain at 02:50

Even though documents exist of fires taking place in Cambridge right back to the 11th Century, it was not until the 16th Century when the first fire precautions where made in a form of a bucket and ladder being given to colleges and churches in Cambridge.
Posted by Fonz Chamberlain at 10:56

It was on the evening of the 21st November 1954 when a student reported seeing a ghost in Silver Street.

He had just returned late back from a visit to Oxford and was walking back to Queen's College, which at the time, like most colleges ran a curfew because they would lock up at night. Any student which managed to get locked out would end up being fined.

On the night in question the student planned to wait till Silver Street was empty and climb over the wall into the college.

As the student walked towards the Anchor Pub he reported that he saw a figure of a old man in front of him. It was a clear night and with a street lamp nearby, he could clearly see that the old man had long silver hair and walked with a stooped posture, holding his hands behind his back.

The Student followed the old man and being younger and faster came very close, to a point where he was right behind him and with his thoughts on how he was planning to climb the wall the old man vanished.

The student left in shock by what he see happen did not hang around and climbed the wall back into the college.

This article may also be of interest: The Society for Psychical Research's Cambridge Roots
Posted by Fonz Chamberlain at 02:58 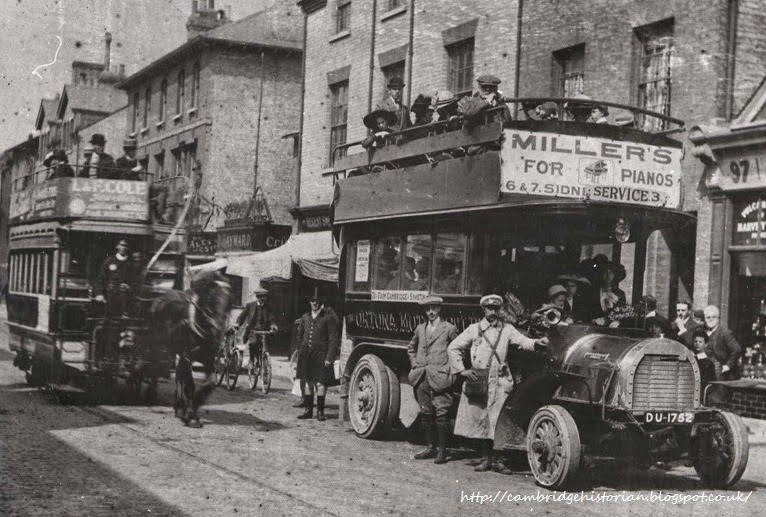 Ortona Buses in Cambridge, which ran from August 1907 to July 1931 got their name from a cruise ship owner James Berry Walford had seen.
Posted by Fonz Chamberlain at 01:41