Below is the full Chapter One from Fred Unwin's book 'Gentle Tales of Old Cambridge'. I have chosen to share it with you because many people have contacted me about Trevor Hughes and in the chapter below Fred gives a insight into his final days. 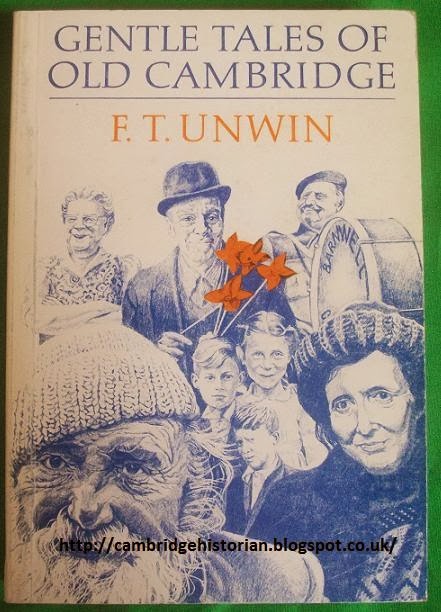 Rock of ages, cleft for me,
Let me hide myself in Thee.
Naked, come to Thee for dress;
Foul, I to the fountain fly,
Wash me Saviour, or I die!'

A student from the Cyrene Community gazes down at Trevor who, worked on feverishly by an army of Addenbrooke's doctors, had returned to his former position at the bottom of the stone steps of the water fountain. Trevor looked pale and thin, his usual chirpy remarks had whittled down to an occasional nod. His cider-forte stood at his side, keeping with it's master's frail condition. A second student joined the other "Shouldn't be allowed, Trevor's not fit to be putting further poison into his system, the doctors have done a good job- now it'll be reversed!"
The first student nodded " He'll die, as sure as eggs are eggs! People will say 'Poor old Trevor', but I wonder what the nursing staff might say?"
"In the eyes of many, Trevor will go down as a man with no chance, a great character! But tucked away in the side streets, are men whose working days have long since gone, they die with pneumonia, bronchitis, with far less medical treatment than given that given to Trevor - But against that, you might say, two wrong don't make a right!" the second student replied.
A few weeks later, Trevor died. His way of living earned him a T.V. funeral, with a following of college dignitaries!
Trevor was enigmatic. He received all - gave nothing! After his death, an Alcoholic Anonymous worker pointed at Trevor's absent spot beside the conduit, "We've lost a very good reason for people not taking to drink!"
His friend replied, "Maybe Trevor did some good after all!"
The market traders turn now to the new arrivals on the drunk scene: they will watch out for the sudden isolation from the gang, the deterioration that will manifest a new Trevor Hughes. The hurly burly of market life goes on. No one will ever find the real answer, there are too many ever willing to call 'black-white'!
God in His wisdom knows the answer - we, on earth, must do what we can to help all such as Trevor - perhaps, even to see him off- at the end!
It was said that Trevor once had high hopes of retiring into the country - now, he was certain of a green corner in the cemetery! Trevor had been dying the last year, he fell lower and lower, dying of starvation a little every day. Tossed from one night haunt to another, he would lie on old sacking, with chatting teeth and frozen bones. Evidently, the world had no place for Trevor, death was to take him, little by little, dragging him to the end through the accursed existence had made for himself. The truth was that Trevor died of isolation, and the filth and hardship of his ruinous life. Over-drinking and dissoluteness killed off one of Cambridge's would -be characters!

Trevor sat beside the Fountain,
and watched the long, dark shade;
and as the shade grew longer still,
he did not feel afraid.
Trevor listened for a football,
and listened for a word;
but, the gurgle of sweet poison,
was the only thing he heard!


*- Above is Chapter One 'Trevor Hughes' from 'Gentle Tales of Old Cambridge' by Fred Unwin. Full credit is to Fred Unwin as author of the work above and a copy of the full book is available HERE along with other titles by the author.